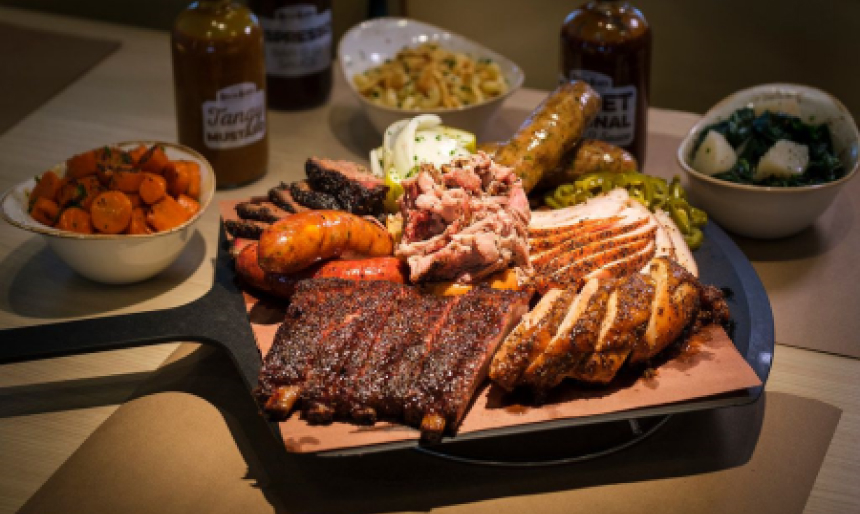 “Texans are used to eating barbecue one way: at a counter [after] waiting in line,” says Christina Pappas, director of marketing for the Pappas family restaurants. Delta Blues doesn’t have a counter, or a line. “Here, you can experience barbecue in this wonderful sit-down environment.”

The restaurant serves all the usuals, like brisket, pulled pork, turkey and sausage. But they point out that the brisket is USDA Prime. And the menu also includes other items like salmon, catfish and steak.

The filets, also Prime, are the same ones the company sells at the high-end Pappas Bros. Steakhouse.

The Pappas family has been in the restaurant industry since 1967, when Christina’s family members opened a diner called Dot Coffee Shop in Houston. The company famously operates Pappadeaux Seafood Kitchen, Pappasito’s Cantina and more, with about 50 restaurants in Houston and 20 in Dallas. They’ve expanded to eight states outside of Texas.

“This restaurant is just a little bit of everybody,” Christina says of Delta Blues. “We are bringing in our barbecue experts, our steak expertise. Half of these cooks worked at Pappadeaux,” she says.

Pappas Delta Blues Smokehouse is the family’s newest restaurant concept, and it indeed feels like a combination of several of its existing brands. The family also operates Pappas Bar-B-Q, a more casual barbecue joint.

The extensive whiskey list is the first clue that Delta Blues is more dressed up. The restaurant in Plano has one bottle of Pappy Van Winkle’s 20-Year Family Reserve — a rare bourbon that’ll cost $100 per pour and yet will (still) sell out quickly. The menu includes two pages of American whiskies, 16 cocktails and a big spread of red wine, white wine, rosé and bubbles. Beers range from Bud Light and Coors Light to Shiner Bock to local sips like Revolver Brewing’s Blood & Honey and Lakewood Brewing Company’s The Temptress.

Delta Blues has concert posters on the walls and ceilings, bar tables covered in bottle caps, and an upscale rustic style. It’s slightly bigger than the Bone Daddy’s that once inhabited this address.

It’s the first Pappas-family restaurant in Plano — which is surprising, given the family’s thorough expansion through North Texas as well as Plano’s reputation for big chain restaurants.

“We’ve wanted to be in Plano for a while,” Christina says. Neighbors seem to be anxious for it since news broke in March 2019 that Delta Blues Smokehouse would open in Plano. It’s the second Delta Blues, after the original opened southeast of Houston in Webster, Texas, in 2017.

Popular items at the original Delta Blues — beyond straight-ahead smoked meat — include Nashville hot fried Texas quail, an appetizer; a cheeseburger topped with brisket called the Pit Boss; and a half or whole fried chicken. Sides are traditional Southern dishes like creamed corn pudding, collard greens, potato salad, mac and cheese and the like.

While the menu is comprised mostly of meat dishes, there’s a veggie plate for vegetarians. The gluten-free menu is extensive, with more than two-dozen options.

GM Paige Mason, who moved from Houston to Austin working for Pappas family restaurants, made yet another move to Plano to open this restaurant.

“There’s so much pride and joy and love in making this food,” she says.

Pappas Delta Blues Smokehouse is at 3916 Dallas Parkway, Plano. Open for dinner only right now; lunch will be added later.

Every year around Christmas time, Pappas sends volunteers to the John & Cissy Havard Boys & Girls Clubs of America of Greater Houston to serve a delicious warm meal. After the tables are set, we…

We ate a copious amount of steak for charity.The DFW Restaurant Week 2018 results are in, and the fundraiser looks to have brought in the largest amount to date, raising $890,083 for charity partners the…

Last week, Pappas Restaurants employees joined together to volunteer 4,000+ hours at our annual Pappas Can event at local Food Banks across five cities! We are here to serve and, together, we can make a…